A Corpus Christi Tradition
July 5, 1948 - Method Snapka and his brother, Rudy, began what would become a legend in the food industry in South Texas - Snapka’s Drive-Inns.  In the late 1940s, Method was working as the clerk for the Corporation Court in Corpus Christi and Rudy was working in construction. They decided to go into the drive-inn restaurant business.
At that time, the Rio Grande Valley was experiencing rapid growth so they took off in Method’s 1942 Oldsmobile to scout locations for their new venture. It broke down in Riviera. They got it running again, but decided to turn back to Corpus Christi.  The car limped along as far as Robstown and then it quit altogether. The brothers got out of the car, looked around, and Method said, “This looks like a nice place. Why don’t we just start here?”, and so, on July 5, 1948, Method and Rudy opened the first Snapka’s Drive-Inn.
​     In those days, hamburgers were twenty cents, hot dogs were ten cents, and root beer in ice cold mugs sold for a nickel. Business boomed and the Snapka brothers took turns overseeing the growing venture. Rudy would manage during the day while Method was at work at the Corporation Court, then Method would take over in the evenings and operate until closing.
In 1953, a second Snapka’s location was opened at 4760 Leopard.  In those days, there was no freeway and Leopard Street was known as “Highway 9.”  It was the main artery into town and, like its Robstown counterpart, business soared.  It was in that same year that Method Snapka and his wife, Maxine, made a trip to California.  While they were there, they tasted the delicious hard shell corn tortilla, meat, lettuce and tomato mixture that was to become Snapka’s trademark tacos.  Method Snapka believes that he was probably the first to serve tacos at the curb and they remain a customer favorite today. Method was faced early on with what to name his quarter- pound hamburgers.  He sat at the newly opened Leopard location and as he thought about the problem, he noticed the signs on the beer cooler that marked the brands inside. His eye fell on a particularly popular brand of the day – Dixie beer, and that became the inspiration for Snapka’s Dixieburger.  By this time, Method had had enough of working at the Corporation Court for eight hours a day and then going to the Drive-Inns until closing. Method resigned from the Corporation Court to devote all of his attention to the restaurant business.
In 1956, in order to serve the growing Southside of Corpus Christi, a third location was opened at 4434 Weber Road.  In 1969, The Snapkas bought two Golden Dome restaurants, one in Annaville and one on Lexington Boulevard (now known as South Padre Island Drive), bringing the total to five restaurants serving South Texas.  The two new drive-inns were just beginning to develop a following when, in August of 1970, Hurricane Celia devastated the Coastal Bend. All five drive-inns sustained heavy damage by the storm and, ultimately, only the Robstown, Leopard and Weber stores were re-opened.
As time went by, the neighborhoods in Robstown were moving away from the original restaurant.  It was about this time that Rudy decided that he wanted to slow down a bit and the Robstown location was closed in 1977.
Snapka’s Drive-Inns and South Texas mourned the loss of Rudy Snapka when he passed away in May of 1995.  His easygoing manner and kind heart left their mark on the people who continued to carry on the business.
A Community Connection
Method’s love of the restaurant industry spurred him to become involved in the Corpus Christi Restaurant Association and the Texas Restaurant Association.  In recognition of his achievements, Method Snapka was named the Outstanding Restaurateur of the Corpus Christi Restaurant Association in 1967. In 1970, he was elected President of the Corpus Christi Restaurant Association.  Method served on every Texas Restaurant Association Committee and on the TRA Board of Directors. To honor his service to the industry and achievements in the restaurant business, Method was named to the Corpus Christi Restaurant Association Ring of Honor in 1986.  In 1987, the Texas Restaurant Association inducted him into the TRA Hall of Honor. To be so honored, the individual must have demonstrated, in the eyes of fellow restaurateurs, employees and his or her community, superior business ethics and success as a food service operator.  Method served on the TRA State Board of Directors and was constantly active in the Corpus Christi Restaurant Association. 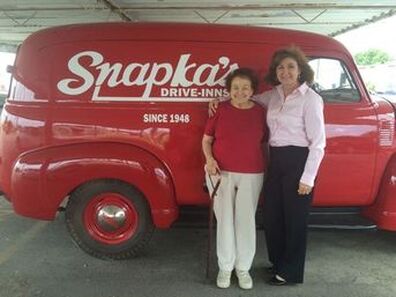 As Good As You Remember
The mainstay of Snapka’s Drive-Inns has been serving quality food that is made to each individual order.  There is no “prefab” anything on the menu at Snapka’s Drive-Inn. From the fried chicken and onion rings to the handmade milkshakes to the Dixieburgers and tacos - nothing starts until the order is placed.  That is what keeps bringing back the original customers, their children and now, their grandchildren. Snapka’s Leopard Street location is a place that buzzes with activity as the local working folk come in to grab a quick hot lunch for great value.  At night, “Highway 9,” as it is affectionately known, is a popular place for private parties. The Weber location which remains open throughout the day and evening continues the tradition of “cruising the lot” on Friday and Saturday nights. Because of its convenient location, it is also the place for a delicious meal to pick up on the way from work and take home.
In 2002, Method passed away peacefully in his sleep after working a full day at his beloved restaurant.  His wife, Maxine, and his daughter, Kathy, continue his legacy and invite all our customers to come and enjoy the taste that is “Good As You remember!”

From our family... to yours.